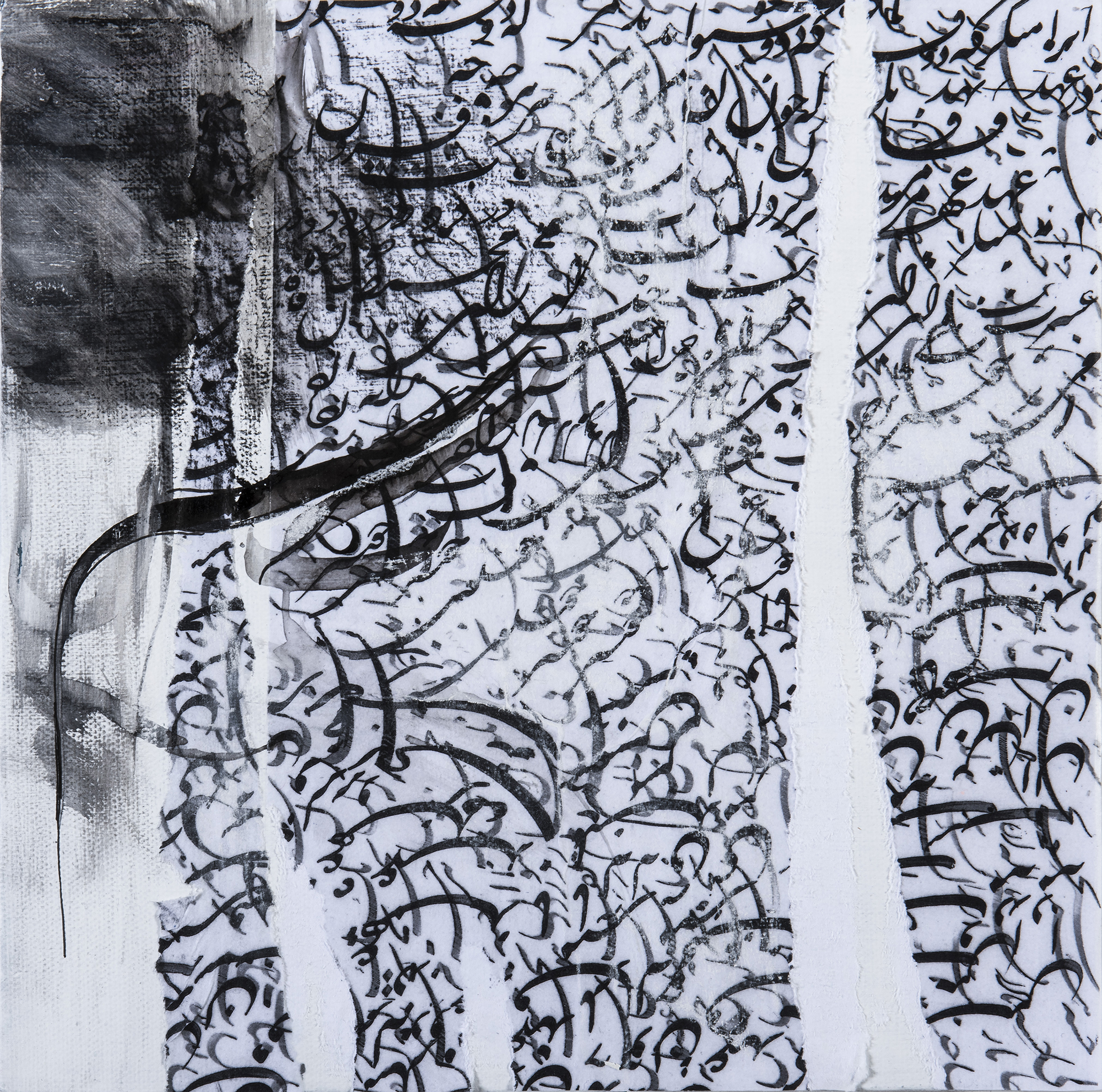 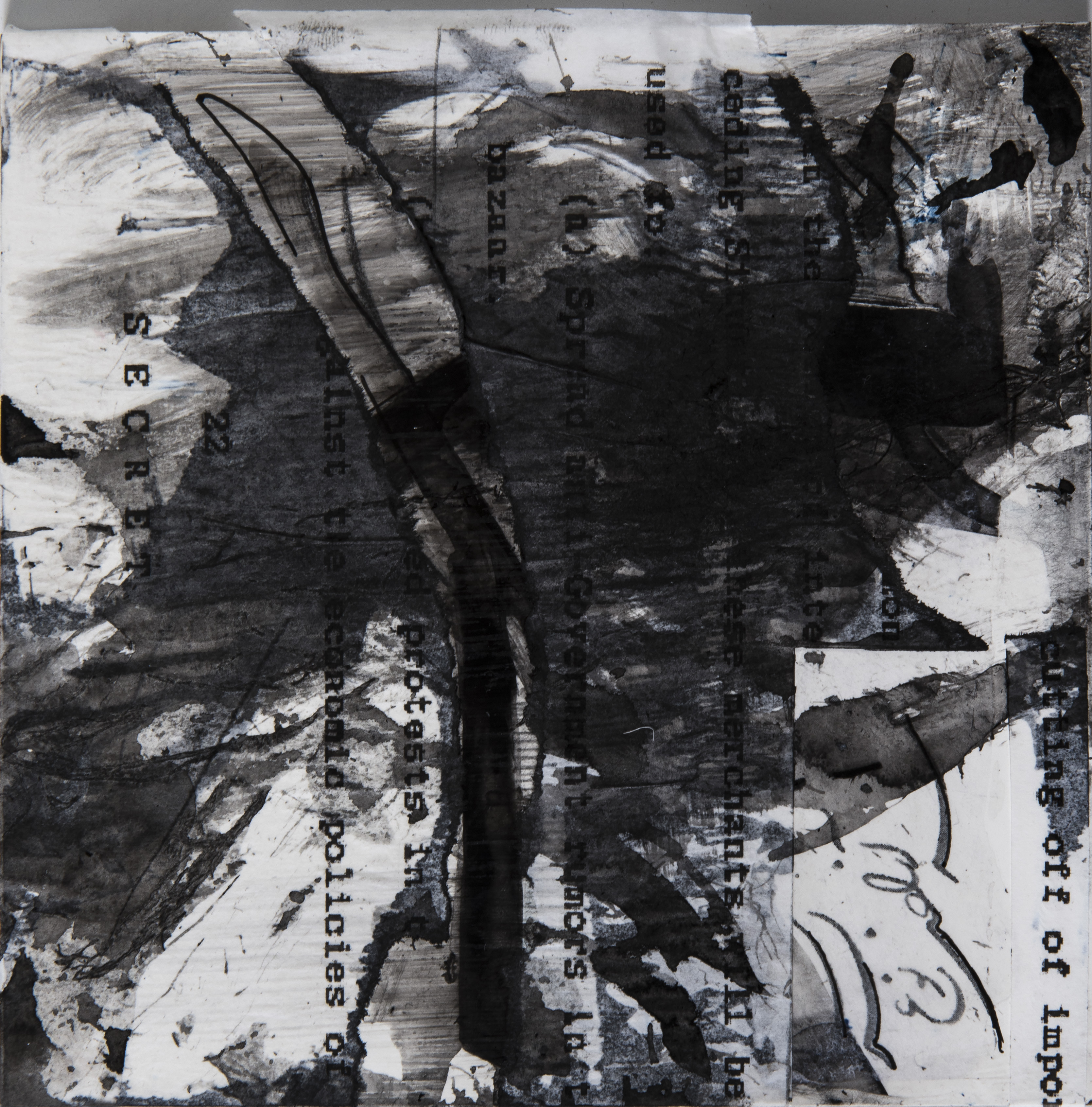 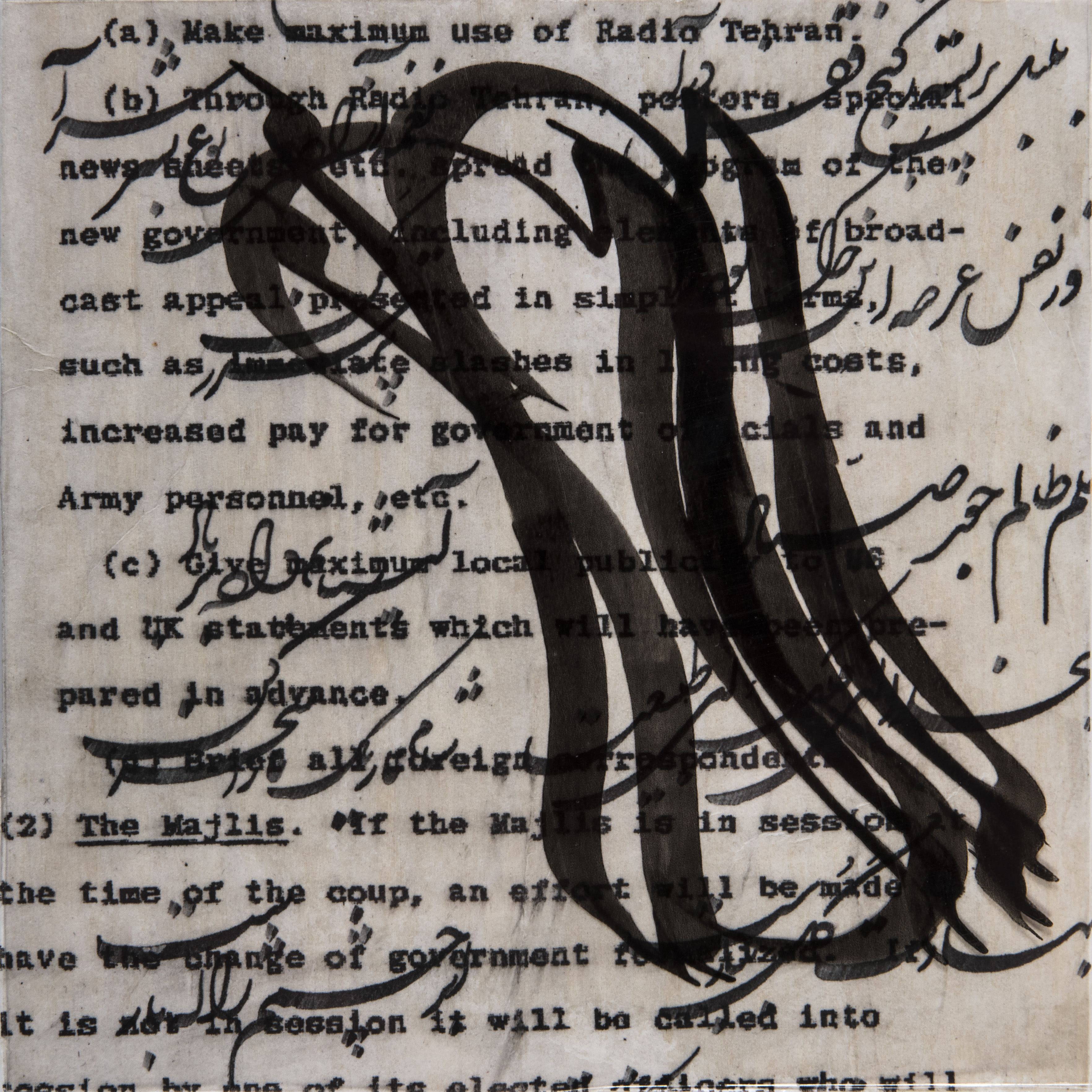 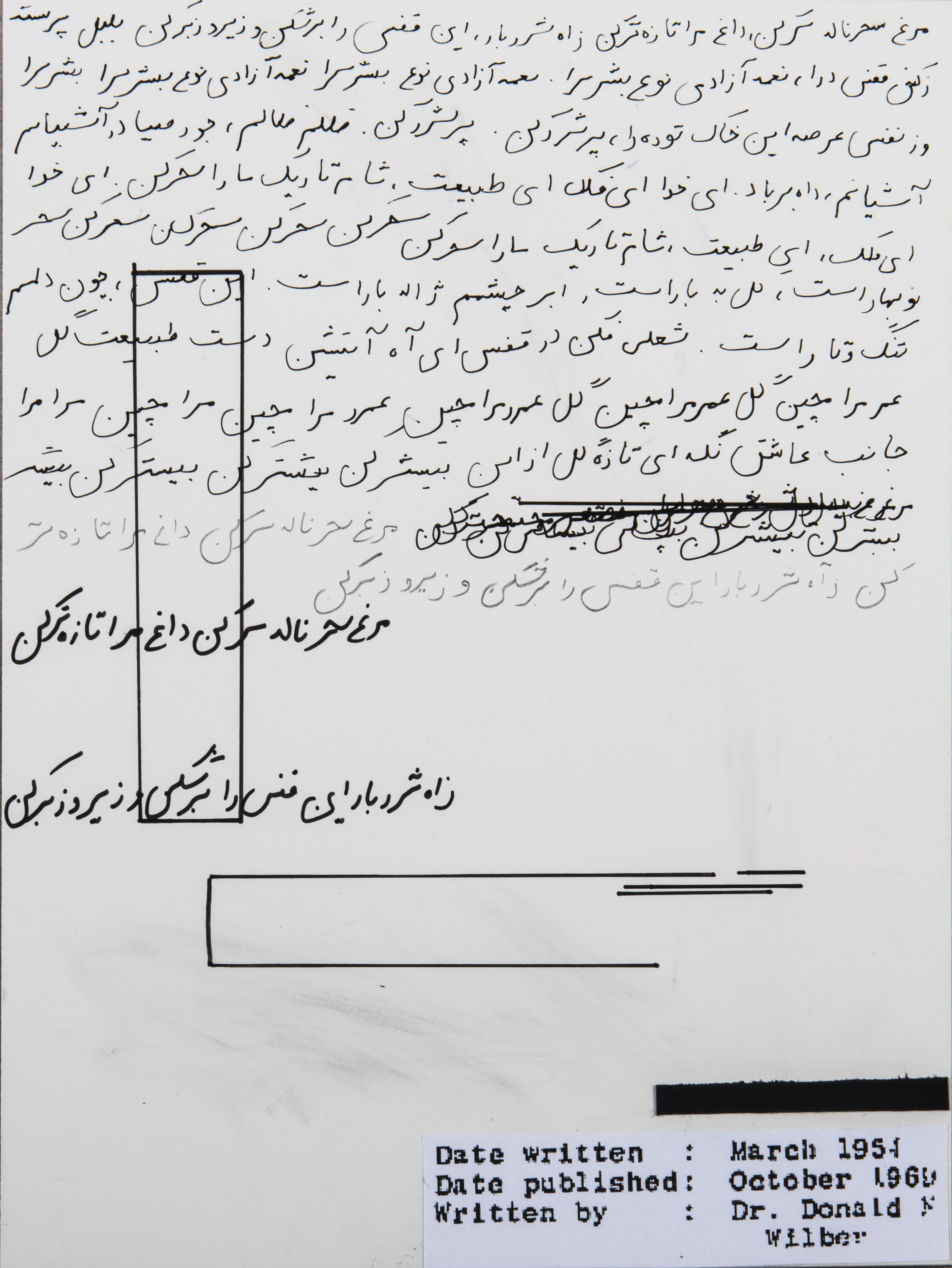 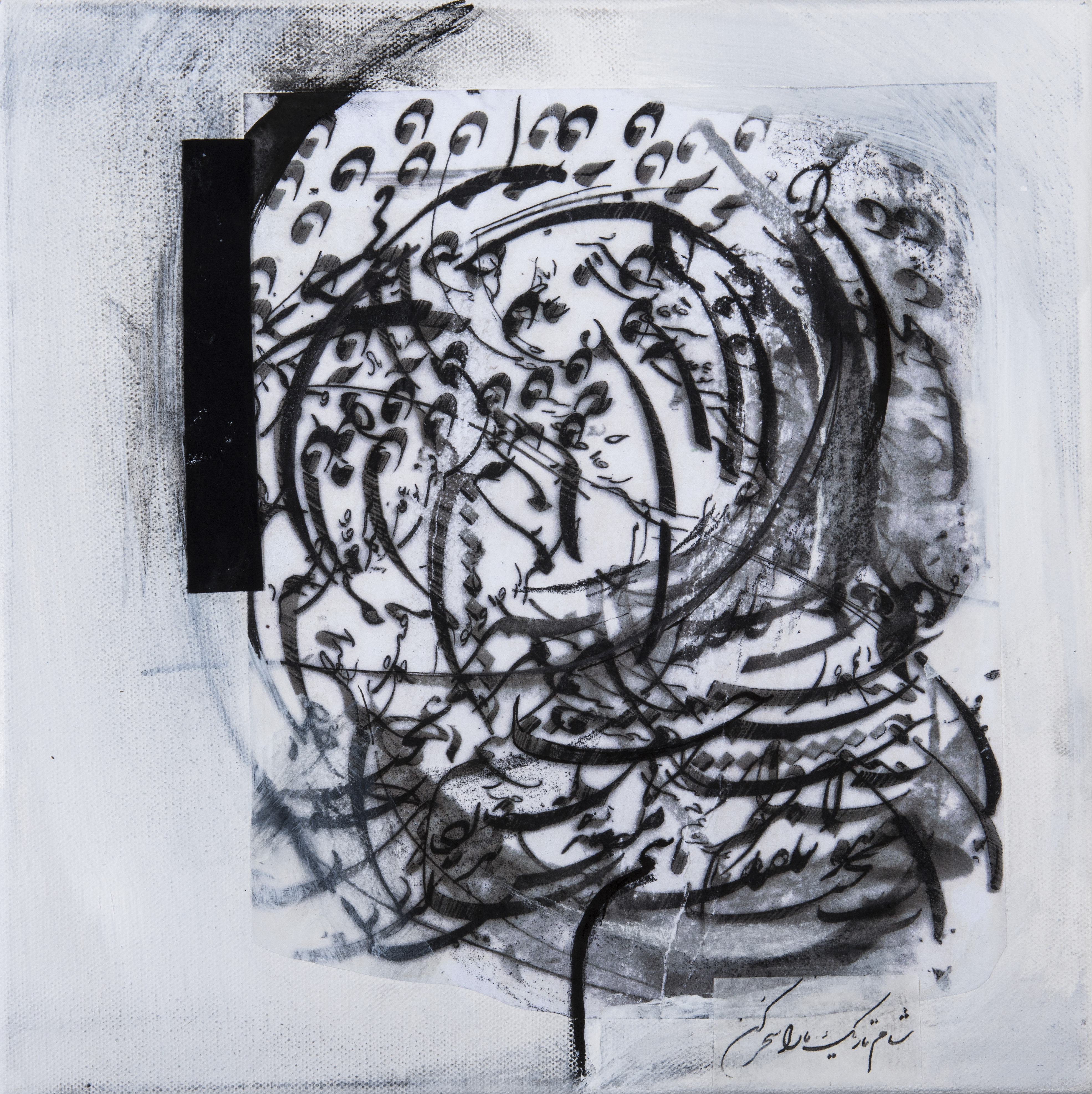 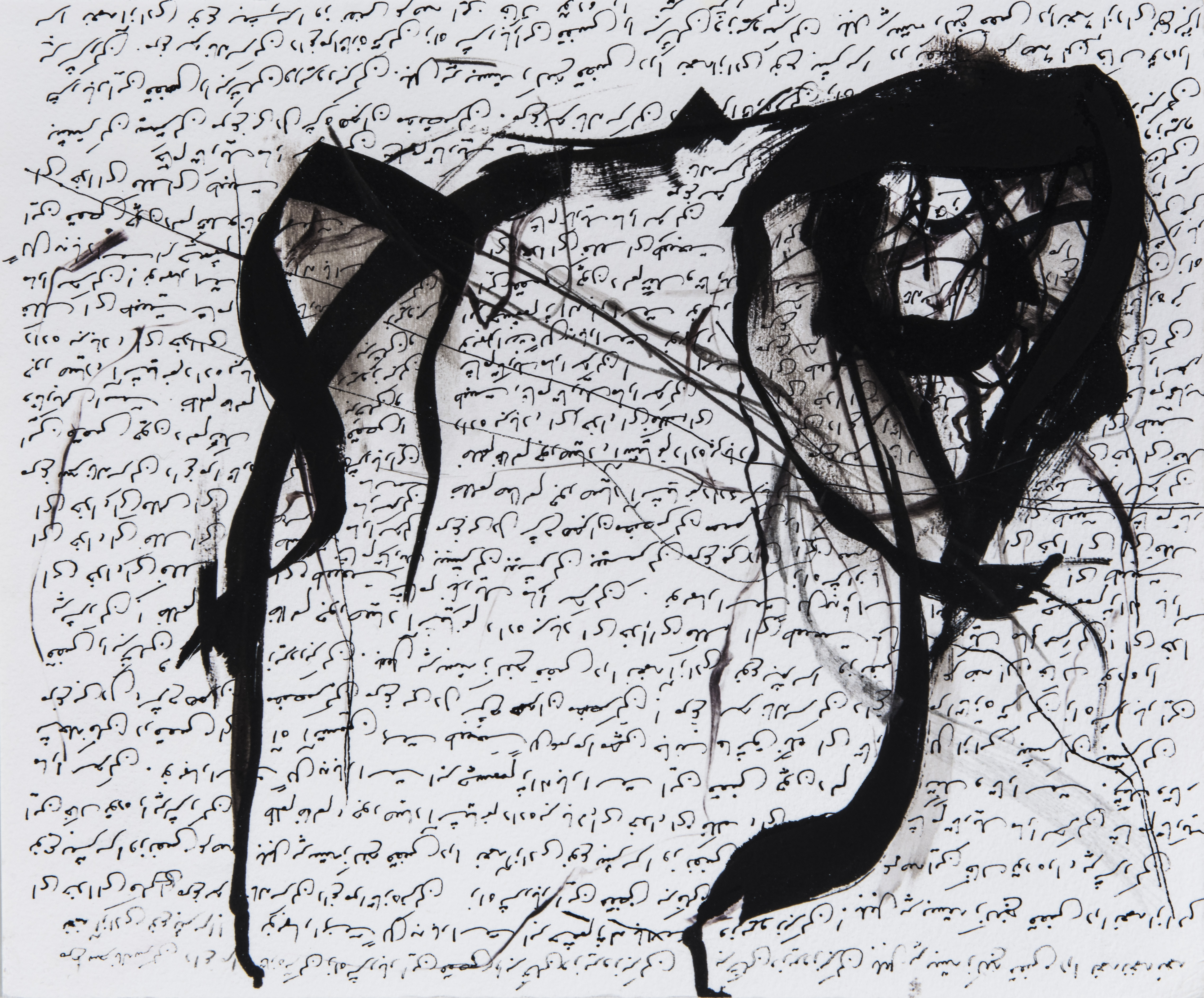 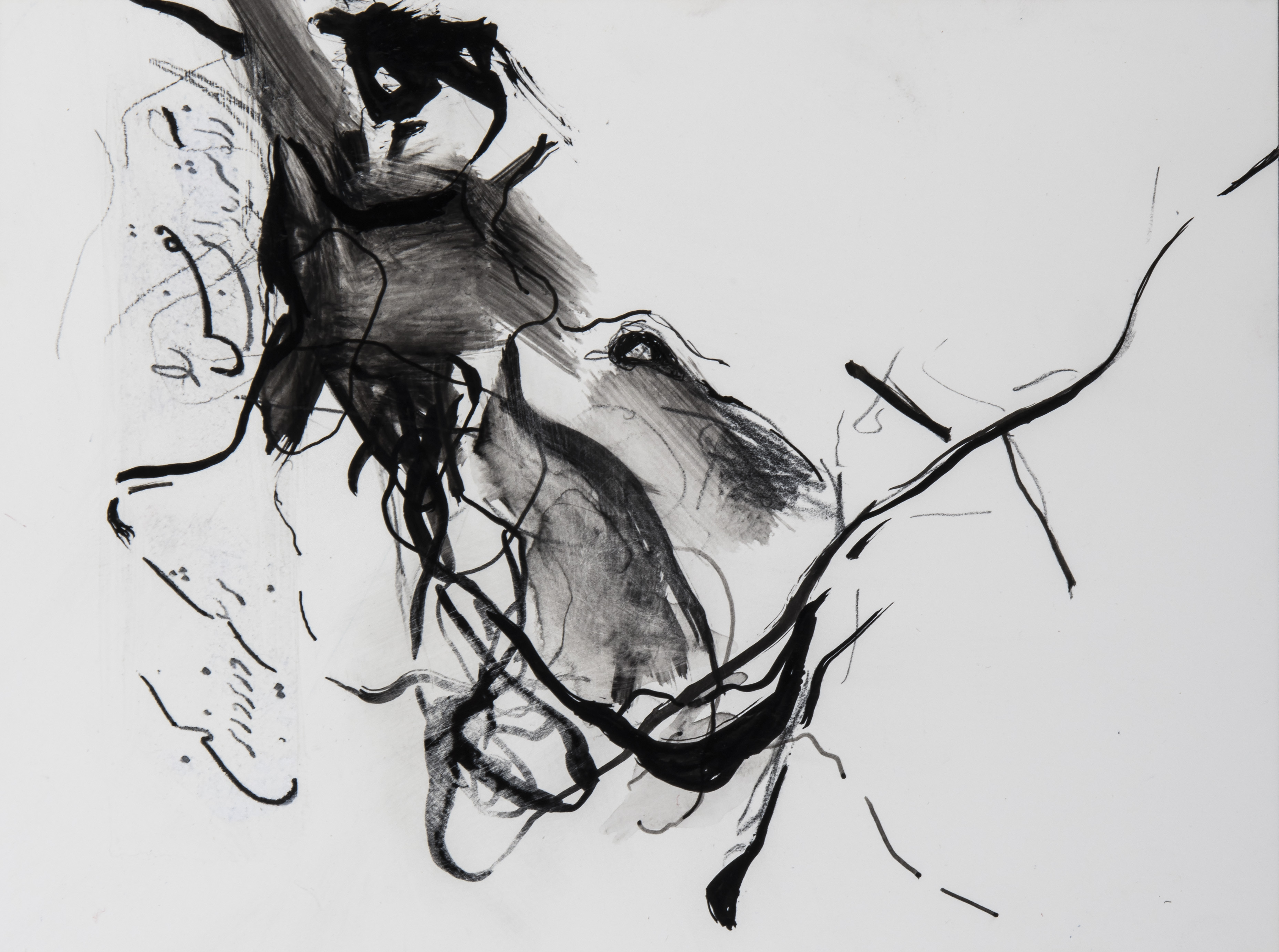 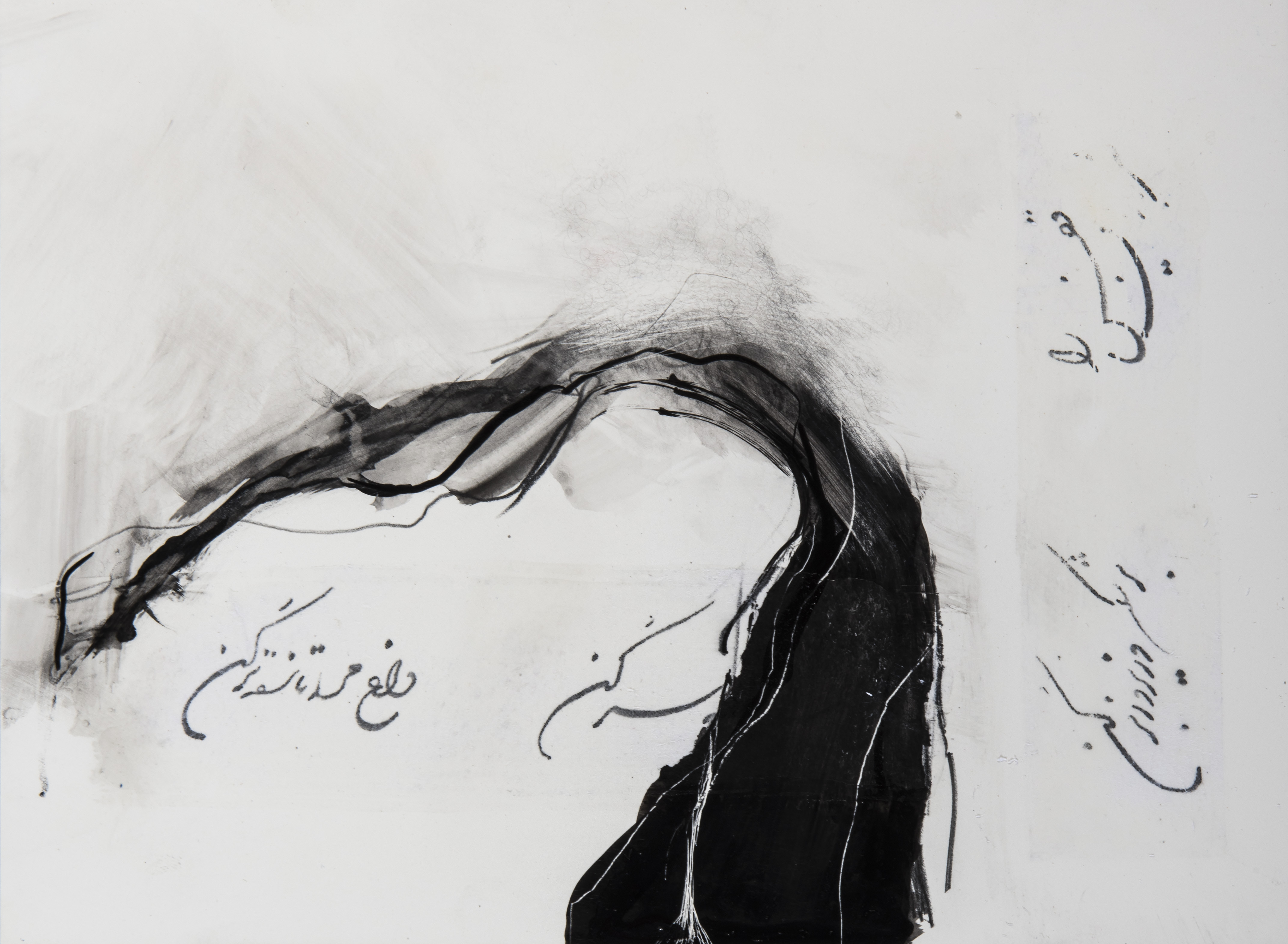 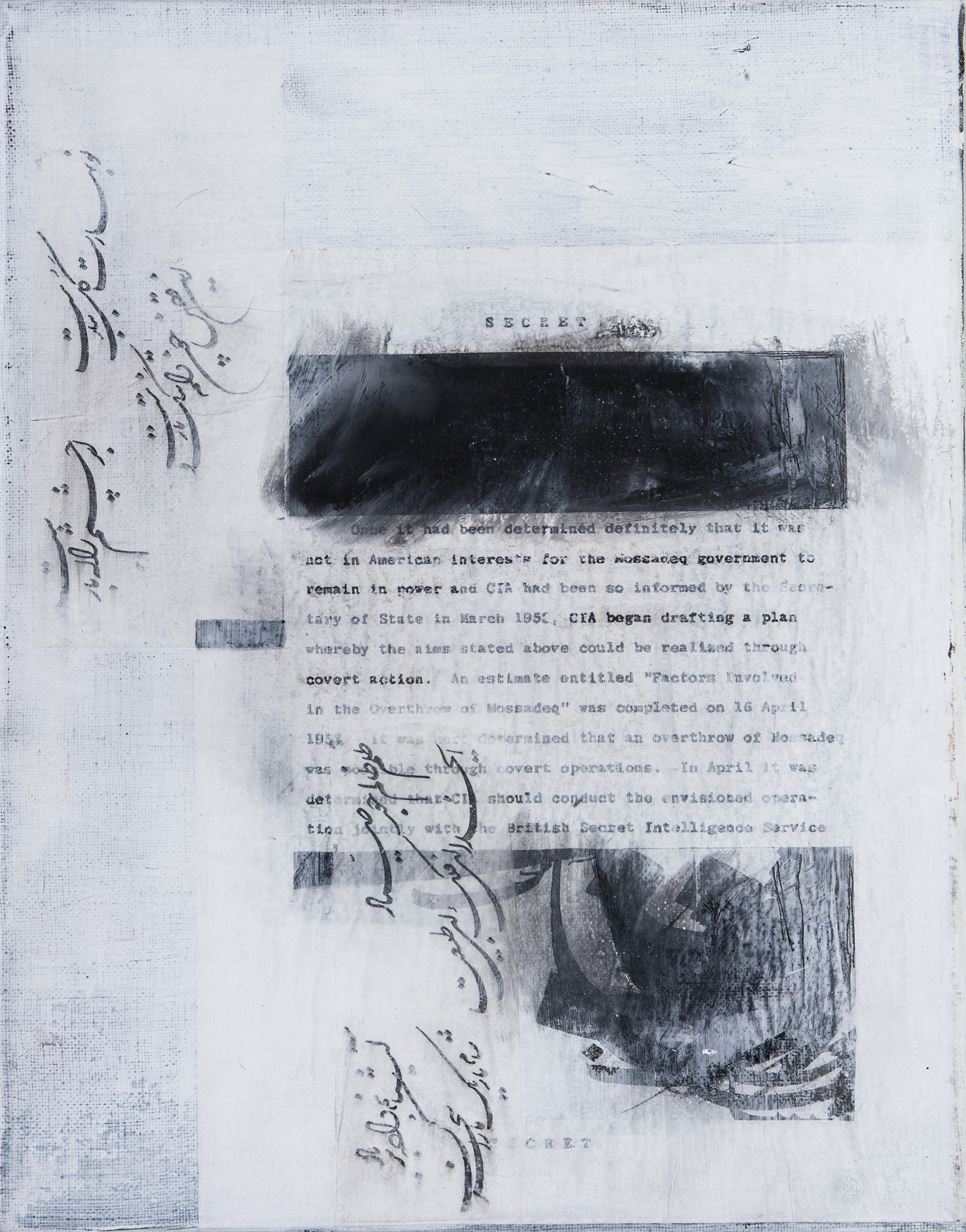 Unquiet Fury: the Women's Uprising in Iran presents the work of Iranian American, Nazanin Moghbeli that was made in response to the cultural uprising that began in 2021 and was led by women. Moghbeli’s work abstracts traditional Persian calligraphy and combines it with Farsi poetry and fragments of CIA documents, capturing the undulating course of Iranian culture and national identity.

"The killing of Mahsa Amini has unleashed the once quiet fury of women in Iran, women whose rights have been suppressed by the Islamic Republic of Iran. I am an Iranian-American woman, dual citizen of enemy nations. I find myself wedged into this intersection, and depending on the politics in each country at any given time, this can provide nourishment or despair. Making art is a physical interpretation of these contrasts. I study the work of poets, musicians, calligraphers, such as Rumi, Meshkatian, Ghertasi. I process their work internally, and then use my hand to express the result. I take traditional Iranian calligraphy, break it, release it from structure, all the while honoring its depth, beauty, and origin. As an Iranian woman living in the United States, I am inspired by their courage to protest and resist.

In this series of works on paper, I incorporate parts of a traditional Iranian poem that has symbolized freedom in Iran, Morghe Sahar, and a contemporary song written by an Iranian who is part of the current protests in Iran. I weave in original documents from the CIA coup in Iran in 1953 which changed the course of history in the Middle East, pointing Iran away from a democracy and paving the way for the theocracy that is the subject of the protests in today’s Iran. With this work, I hope to create a context for what is happening in Iran now, and to offer my quiet response on paper.

I remember being a 9 year old girl living in Tehran, getting ready for school, and having to wear the veil as mandated by the morality police. I walked into the school yard, and where there should have been kids running around playing in shorts, there were rows of veiled girls lined up, reciting a prayer that opened the school session. It was an intimidating and unnatural introduction to elementary school, and I will never forget the feeling of self-consciousness that I carried through the following years in Iran, worried that some part of my hair or skin would inadvertently creep through."

Nazanin Moghbeli was born in 1974 in Baltimore, MD, into an Iranian family. When she was 3, her family moved back to Iran, where she lived through the Iran/Iraq war, deposing of the Shah, and the Islamic revolution. These events deeply influenced her evolution as an artist. While living in Iran, Moghbeli studied Persian calligraphy, miniature painting, and music. As an adult, she continued her study of Iranian music with prominent masters of Persian traditional music, including Hossein Omoumi, and developed a deep appreciation for the intricate dastgah system of music.

Moghbeli moved to the United States with her family in 1983, where she pursued dual art and biology degrees at Swarthmore college. Her post-graduate training was at the Maryland Institute of Art and Johns Hopkins School of Medicine and Public health. Moghbeli creates work at the intersections of disparate disciplines: calligraphy, painting, poetry, music, and medicine. Her work is preoccupied with her dual identities as an Iranian and American, artist and physician. It explores the nostalgia and loss, familiar to immigrants from war-torn and post-revolution countries, for a place and time that no longer exists.