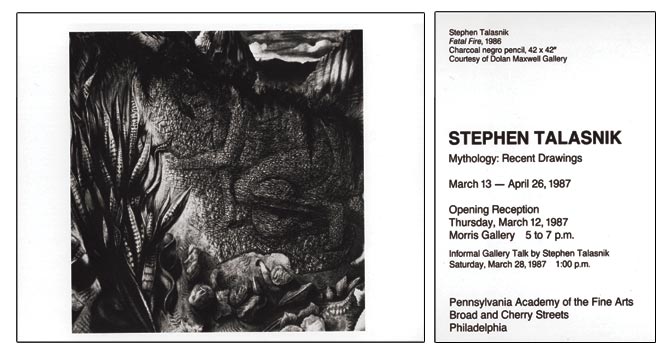 To some eyes, the use of color in art may seem a teleological necessity, as it has been in television and film. Yet it is just this atavistic sense of belonging to an earlier time and place that commends a grissaille palette to Stephen Talasnik. He is an artist attracted by the black and white of classic documentary photography, in which images appear at one remove from the depicted reality.

Stephen Talasnik’s primary work has always been drawing. He often teases an extraordinarily velvety chiaroscuro from his charcoal and graphite images by using such subtractive tools as erasers. Surfaces are like a palimpsest as the artist seems to delve below the forms to reveal earlier strata of visual information. His classically inspired subjects appear both physically and figuratively “unearthed.” Because he is such an inventive appropriator of past styles, Talasnik’s drawings are mysteriously allusive, evoking a strong feeling of history.

Mythology, the title of his Morris Gallery exhibition, consists of four series of black and white works on paper. The largest in scale, “Fossilized Frescoes,” includes two vertical drawings in which the figure makes an appearance for the first time in his mature work. Working from the model, Talasnik addresses the body directly, dealing with a human presence as distinct from the mosaicized bodies in the “Legends” series. Recent travels in Italy inform the imagery in the “Manuscripts” and “Travel Drawings” series. Talasnik’s highly original imagery, matched by his bravura techniques, results in a compelling and beautiful body of work.

The works for this exhibition were made possible by a generous grant from the National Endowment for the Arts.

Steven Talasnik was born in Philadelphia in 1954. He received his Bachelor of Fine Arts from the Rhode Island School of Design (1972-76), and earned his Master of Fine Arts from the Tyler School of Art in Philadelphia and in Rome (1977-79). From 1980 through 1986, he served as gallery coordinator for the Samuel S. Fleisher Art Memorial in Philadelphia. Currently, he is an adjunct instructor of drawing at the Tyler School of Art, and he has been appointed assistant professor of art at Temple University Japan in Tokyo, effective fall 1987.

Talasnik has received fellowships from the National Endowment for the Arts (1985) and the MacDowell Colony (1987), and he was also a visiting artist at the Brandywine Graphics Workshop. His work is represented in numerous permanent art collections, including the Philadelphia Museum of Art, the Pennsylvania Academy of the Fine Arts, The Free Library of Philadelphia, the University of Delaware, the Philadelphia College of Art Print Collection, the FICA Victor Company, The Prudential Life Insurance Company, and the Synthes.

Penny Baker, “Shecky, A Phantom of the Theatre,” Atlantic County Sunday Press, May 15,1983.

The City Real and Imagined: Urbanism, Identity, and Identification