"Pfaff sometimes speaks of her work as “splicing” images, as she seamlessly joins recognizable practical objects with abstract forms. " 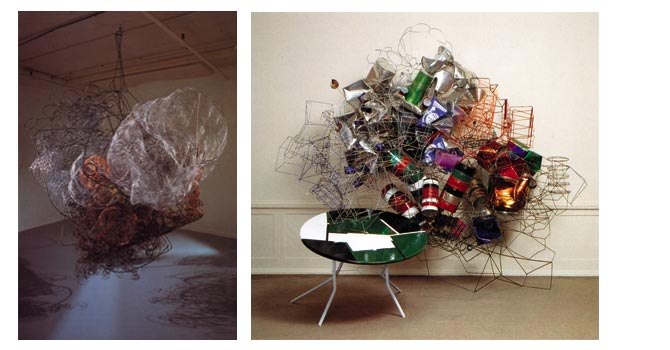 Like most of the artists who are invited to create new work at The Fabric Workshop, sculptor Judy Pfaff had never before worked with cloth. Prompted by the need to develop a Workshop project, she began to reflect about fabric’s inherent nature and its visual definition as a woven structure. An inventive spirit for whom found objects exert a strong influence on the forms she constructs, Pfaff was stimulated by a Mexican woven wire egg carrier that was in her possession. With this form triggering new possibilities in her mind and goaded by the exigencies of an upcoming exhibition, she launched an entirely new direction in her art.

The process began with research and development. Working with The Fabric Workshop staff, Pfaff first explored the manufacture of domestic objects that normally require cloth; for example awnings, mattresses, and lamp shades. She played with the shade armatures, as if she were executing “cat’s cradle”, creating multiple new shapes by bending the metal . Anything hat held fabric taut was fair game. Umbrellas were scrutinized. She investigated woven scouring pads and “deconstructed” them into knitted copper and stainless steel fabric. Taking visual cues from the round egg carrier, Pfaff directed Workshop staffers Sue Patterson and Cynthia Porter to weave wire into a variety of circular and tubal shapes. In her resulting sculptures Pfaff, a master alchemist, transformed these diverse sources drawn from laborious handwork and modern technology into unified, dynamic constructions.

When I was in college, one of the elementary math classes was dubbed “geometry for poets.” Some of Pfaff’s new work is imbued with the spirit of “poetic geometry.” She sets up formal patterns and then softens or alters them where we least expect it — a chair for example may have three “normal” legs and one ringer, a long, gawky tentacle that upends our visual complacency about what a chair looks like. In other pieces a highly complex rhythm of forms puns on shapes from one medium to another. She eggs on our eyes for example, to flit from the eccentric saucer of a flattened trash can cover, to a handblown glass bubble, to a skeletal umbrella, to delicately woven wire balls. The core of another work that is suspended from the ceiling consists of mops of tangled bedspring curls from which dangle a few tight ringlets.

In Pfaff’s description “galactic,” this new work is coloristically sotto voce in comparison to the sassy hues of earlier pieces. For example she now exploits the unadorned surfaces of glistening industrial ductwork, or the naturally variegated coloration of tin cans and containers. The Fabric Workshop installation has several works en grisaille, the metallic grays and blacks introducing a darker note of both form and content. One piece uses artfully patinated rust played off against the close tones of shiny copper wire. The handwoven components allow us to peer through them to other parts of the sculpture and to focus on their own structure.

Because Pfaff’s work is large in proportion to the low ceilings and narrow dimensions of the rooms at The Fabric Workshop, the sculpture installation here seems more like an environment to be entered. The sensation of being engulfed by the art is less pronounced at the Academy, where the viewer encounters Pfaff’s work after traversing a succession of grandly scaled, art-filled galleries. But here the decorative elements of Furness’s architecture create an exciting foil for the play of patterns in Pfaff’s sculpture. The installation at the Academy extends the permutations of the elements visible at The Fabric Workshop. For example, the focus of one work is an undulating wooden configuration of stylized petals, roughly brushed with copper leaf. In general, color plays a more active role in the sculpture on view at the Academy. Accents of hue include thin washes of blue, green, or orange on a variety of tin containers, tinted glass discs, and colored globes fabricated of woven wire or welded circles.

Pfaff sometimes speaks of her work as “splicing” images, as she seamlessly joins recognizable practical objects with abstract forms. But let the viewer beware — the artist enjoys fabricating elements that mimic familiar, generic objects. By her account 95% of each sculpture represents elements she has created, and only 5% accounts for bits she has found readymade. Yet these objects are very important and, in her words, “start the ball rolling” for her creative process.

The artist views the manipulated wire forms woven on her instructions by The Fabric Workshop staff as an “anti-welding” element in her work. The sedentary and repetitious processes of sewing, weaving and knitting are new to her sculpture yet deeply familiar to the artist. Her grandmother was a seamstress in post-war London and Pfaff recalls that as a child she would curl up under the treadles of several big sewing machines. While the visual thinking that led to the body of work on view at The Fabric Workshop and the Pennsylvania Academy may have been triggered by the Workshop process, at heart it springs from her earliest memories of creative enterprise.

The City Real and Imagined: Urbanism, Identity, and Identification